Home / Staff News / Henry Price and the Department of Budget, Planning and Analysis 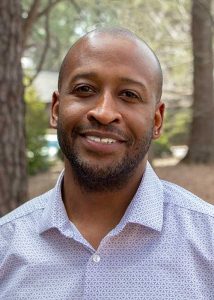 Financial Analyst Henry Price remembers coming onto the UNC-Chapel Hill campus when he was in his early teens with his family — and his excitement, much later, when his older sister was accepted as a student here. From a young age, he knew that he wanted a connection with Carolina, and in 1999, he got his first opportunity. He had just graduated from North Carolina Central University with a degree in Finance, when Tar Heel Temps gave him a call and placed him in the Department of Health Behavior, working as an Office Assistant IV under Melinda Walden. There, he worked in the business department, making copies for the faculty and paying a few invoices for the business office.

“Over the years, I have had great managers, co-workers and other UNC employees to teach me the next steps in my positions,” he said. “Then, I’d find myself in a new opportunity stemmed from those moments.”

How did he become so focused and driven?

“My mom was pregnant with me when she was in college, and I guess that environment kind of rubbed off on me,” he explained. “I got married and had four kids by the time I was 29, and that really gave me a new drive. I was always up for new challenges, so having a family made me want to learn more and advance my career.”

As the department of Budget, Planning and Analysis has a myriad of problems to solve each year, the role is a great fit for Henry.

Every summer, after the legislature approves the budget, UNC-Chapel Hill receives the funds in three budget codes: Academic Affairs, Health Affairs, and AHEC (North Carolina Area Health Education Centers). From there, Henry and others in his office work to help departments manage their payroll budgets and other budgets granted by the State to spend appropriately. Throughout the fiscal year, The North Carolina Office of State Budget and Management (OSBM), UNC System Office or other state agencies notify Henry about any new budget changes or initiatives that will be applied to the University’s State funds.

“It gets a little more challenging each year,” he admitted. “Sometimes, we’re asked to send up a budget for certain schools so that the System Office can do planning. Other times, we’re asked to cut a budget by a particular percentage or dollar value. We definitely get seasonal requests, such as reporting actuals for a fund type, the amount of tuition waived for various student types and even HR related data.”

For some requests, he gets assistance from the subject matter experts across UNC-Chapel Hill who provide their knowledge and report the information.

“Knowing who you can contact to help you perform your daily tasks has tremendous value,” he said.

While summer has his team busy with application of the budget, in December, Henry and staff prepare for the legislative sessions by submitting personnel budget information.

“This data has historically been used to assist them with raise and fringe rate increase budget amounts,” he explained. “We also work with the System Office and OSBM to formulate the state budget for the next two years — this is our Biennium budget process.”

His office ensures that the approved budget for raises are locked into the ConnectCarolina system correctly. They also get involved in budget increases related to enrollment growth, school-based tuition and campus-based tuition decisions.

Henry acts as the lead for his department.

“I work with a great group, they know what they’re doing,” he said. “If there are issues that arise they have not faced, I help provide them guidelines and outlines how to implement various decisions.”

Along with budget planning, Henry also takes a role in campus committees.

“I have had the pleasure to work on various projects since I have been here that have shaped our University — like the EPA web modules BMS and ARP, TAG, KK Redesign, and the current ARP,” he said.”ARP is one of our recurring committees. We meet to discuss how the next year’s proposed raises might be implemented and plan various scenarios for how these items might be calculated in the system to pay employees appropriately. I also serve as a member of the stakeholders for ConnectCarolina. ”

In addition, he keeps active with many folks on campus – something he greatly enjoys.

“People often call me to help them develop their financial picture,” he said. “Some calls are actually to see how I am doing, which means a lot and can be a testament to the job I am doing.”

Of all the work he’s done, it’s the relationships that he’s built that matter the most.

“Your legacy is built by the relationships you have with people across campus and how you impact their ability to do what they do best,” he said.

For Carolina’s financial future, that’s a legacy in the making.